A Simple Candidate for a Simple Electorate

Donald Trump has a simple plan. He often says so, including this quote following his Indiana primary win.

Many Americans like things to be simple, so they like Mr. Trump’s promises, especially when they are presented in simple language. According to Grammarly, Donald Trump’s sentences contain 3.3% complex language as determined by seven “clarity algorithms” including sentence length, passive voice and non-restrictive clauses. This is the lowest percentage within the 2016 presidential candidate field, all of whom fall well short of Ronald Reagan and Jimmy Carter at 17.2% & 17.3%, respectively.

So let’s look at one aspect of Mr. Trump’s simple plan. Would the candidate’s ideas on tax and trade policy bring manufacturing jobs back to the United States?

Donald Trump proposes pulling out of existing free trade agreements (FTAs) including that with Canada and Mexico (NAFTA), ending negotiations on new ones, and setting high tariffs on goods imported from countries unilaterally determined to use unfair labor practices. Regarding income taxes, Mr. Trump would like to cut taxes on businesses and upper income individuals to stimulate the economy.

This sounds great – it’s so simple. For many voters, Donald Trump should win the election because he assures us that we’ll all have good jobs, many in manufacturing, and things will go back to being the way they were in the good ole days. What could go wrong?

Well…what if the simple plan doesn’t work? There seem to be some flaws.

Protectionist Trade Practices
Would the establishment of protectionist trade policies help or harm the U.S. economy?

So is NAFTA to blame for the loss of these jobs? What about the other FTA’s the U.S. has enacted?

The United States has free trade agreements with twenty countries. The oldest agreement is with Israel which began in 1985 and has had a number of iterations. President Obama would like to execute the Trans-Pacific Partnership (TPP) which would modify the FTA with five countries and add six new ones. Both Mr. Trump and Ms. Clinton have come out against the TPP, so it’s future is uncertain.

How have manufacturing output and jobs changed over the era of the FTA? I have a rather dramatic graph for that. 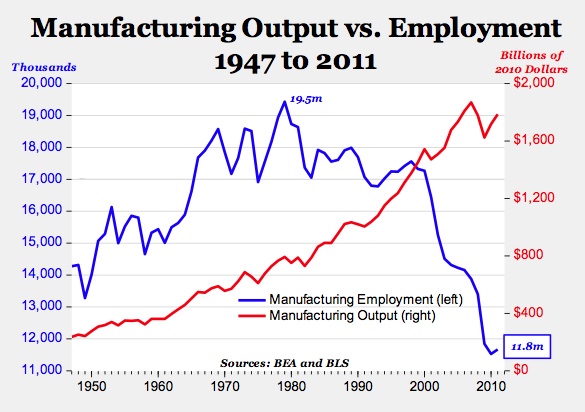 Simple. Companies shipped manufacturing overseas once the federal government granted China permanent normal trade relation status in late 2000. And, sorry to tell you this, but many of us are also to blame because we didn’t stand up for the American worker with our investment capital.

This was the era of the Dot Com bubble. The stock market was soaring and a lot of us felt pretty good. Then our financial advisors suggested some high performing mutual fund with Asia in the title and we went for it.

With those mutual fund investments, we gave our permission. We gave permission that, as long as you promised us good returns, it was okay to ship jobs to China. Many of us didn’t know that’s what we were doing, and others decided that it was happening anyway, so it was best if their portfolios weren’t left behind, but companies took our permission and ran with it. They shuttered U.S. factories and built new ones in China and other Asian countries to take advantage of cheap labor costs and the consistent tariffs that normal trade relations promised.

At the same time other companies were building manufacturing plants in the U.S. and many were car companies. But the new plants were highly automated and could produce many more cars per employee than older automotive plants. Look again at that graph – there has been a steady increase in manufacturing output. The United States is still a manufacturing powerhouse. We’re just doing it with more robots and fewer people.

So back to Donald Trump. Would restrictive trade policies result in a return of the types of jobs that have been lost in droves since 2001?

No. Those jobs are gone and they’re not coming back. For clarity, those jobs are the ones where someone with or without a high school education could walk into a factory and do the same repetitive task for forty years. That job has been replaced by a robot, both in the U.S. and in other countries.

According to the National Association of Manufacturers, 80% of manufacturers report a moderate to serious shortage of qualified applicants for skilled and highly skilled production positions. The Association also estimates that 3.5 million manufacturing jobs will be created over the next decade under current trade rules and that as many as 2 million of those jobs will remain unfilled because too few high school graduates have the skills required for the work.

Highly protectionist trade policies could bring some manufacturing back to the United States, but it’s a huge gamble. First, without the skilled labor force to work in modern production facilities, we are not an attractive place to build a factory. Potentially, manufactures will promise to build in this country if they are allowed to import skilled workers under the H-1B visa program. This is the program used to import computer programmers because the U.S. education system doesn’t meet the tech industry’s needs, and we want to keep the companies in Silicon Valley. Should this happen with manufacturing, it would not be a proud moment for a Trump administration.

Second, what if the companies don’t bite? What if they decide that protectionist trade policies will be short-lived because American consumers would rebel at the higher prices? If we need a new toaster and there are none made domestically, we’ll still buy the toaster but complain about the price. I’m not sure a President Trump would want to claim credit for the high inflation rate that would result from large tariffs on products for which there isn’t a domestic alternative.

In short, manufacturing jobs of the 1940’s to 1990’s have been replaced by automation and Americans would become very upset with the higher prices from tariffs.

Income Tax Reform
I have written about this many times before, but tax cuts for the top 10% wage earners do not stimulate the economy.

In his economic working paper “Tax Cuts For Whom? Heterogeneous Effects Of Income Tax Changes On Growth And Employment,” Dr. Owen M. Zidar reports that tax cuts or increases for the top 10% earners in the U.S. have no impact on job growth over the following two years. Tax changes for the bottom 90%, however, have a substantial impact. For every 1% change in tax burden as measured by percent of a state’s gross domestic product (GDP), there is a 5% change in job creation over the following two years.

Donald Trump’s individual income tax plan would cut taxes on high income earners, but it does something else, too – it raises taxes on low wage earners. This isn’t obvious from Mr. Trump’s statements or campaign website, but when you realize that a substantial portion of taxpayers in the bottom 30% of income distribution have a negative tax rate under the present tax code (they receive more from refundable tax credits than they pay in), a 0% rate is a tax increase for low wage earners. According to Dr. Zidar’s research, this will slow the economy and reduce job growth.

Conceivably, business income tax cuts could stimulate the economy if well targeted. The problem I see here is that businesses will be reluctant to make large investments in an uncertain economic environment. Mr. Trump promises a 6% growth rate which would make his programs revenue neutral, but most economists disagree. They feel there would be a significant loss of federal income and much higher deficits. That is not an economic environment that fosters long term investment, and the proposed restrictive trade practices just add to the uncertainty.

As you may have guessed from these 1,500 words, I don’t accept simple solutions without justification. From my analysis, I don’t believe Mr. Trump’s simple tax and trade plan would bring back the jobs he claims. I contend that the people benefit the most from nice boring, steady growth – no bubbles and no bursts. Drastic actions – as proposed in Donald Trump’s simple plans – are not the best formula for this kind of growth.

Mr. Trump’s supporters want to believe he has a way back to the good old days, but that is based more on faith than reason. There is an almost religious fervor to this belief, and when it comes to religion, people are perfectly willing to abandon common sense and think they have all the answers. That is not a knock on all religion. It’s just that there are many which proclaim that they are right and everyone else is wrong in their beliefs. They can’t all be correct. Now that’s a simple statement I can support.

I'm a 50+ married man who always seems to have a large backlog of work to do, but also a lot of flexibility in my schedule. Much of the work I do is volunteer or taking care of extended family members. I suffer from, as my priest calls it, "the sin of self-sufficiency," which means I can figure out how to do most things myself, and consequently, reduce the need for community to solve problems. As a logical extention (at least to me), I find myself called to comtemplate the country's and the world's woes and offer my observations. I hope someone out there will find them useful.
View all posts by tonyj126 →
This entry was posted in Economics, Religion, U.S. Politics, Uncategorized. Bookmark the permalink.